I love this game. I don't understand why it's not more popular. The only explanation I can think of is that it's single-player only. They originally planned to include multi-player capability, but it was sacrificed somewhere along the line, to get the game out on schedule. That was probably an unfortunate decision. Even though the vast majority of gamers play single-player, core gamers prefer multi-player, and their choices tend to have a lot of influence over everyone.

Undying is set in 1924. You play the role of Patrick Galloway, come to help his old war buddy Jeremiah Covenant. Something's seriously wrong at the brooding old Covenant mansion. All of Jeremiah's siblings have mysteriously died, and he's afraid he'll be next. He's now bed-ridden, so it's up to you to delve into the dark secrets of the cursed Covenant family. (If this sounds Lovecraftian, it is. As the game goes on, the connection to the "Cthulhu Mythos" becomes explicit - a nice touch for Lovecraft fans.)

There are a large variety of weapons. The ordinary weapons are all ones you would expect to find in Undying's time frame. But don't worry, you're not stuck with just a pistol and shotgun, because you also have mystical weapons to wield. I really liked the interface: weapons in the right hand, spells in the left, controlled with the left and right mouse buttons. It made it much easier to fire off both spells and bullets (and sometimes, you need both!).

Undying pushes the old Unreal engine to its limits, creating a game with unparalleled atmosphere. This is the scariest game I have ever played. Given its age, the graphics are stunning. The opulently creepy old mansion, haunted gardens, horror-filled underground crypts, lonely ruins, the blasted, floating city of Oneiros - they are all gorgeously rendered. The ghosts, monsters, and demons you encounter are among the scariest ever to prowl a game. They aren't particularly smart, but they are fast, and deployed where you least expect them. For example, I went down one long, dark hallway, carefully watching for anything that might spring at me from a side corridor. I saw a corpse lying on the floor at the next intersection, and slowed down even more. Creeping closer, I suddenly noticed blood dripping down from above. I looked up - to see a howler clinging to the ceiling high overhead, ready to drop down on me. Shriek! It could have been a scene from a movie. 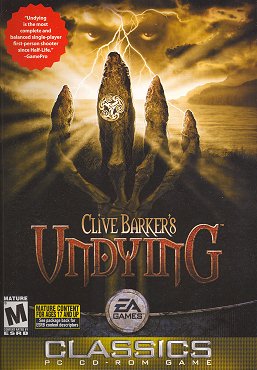 A lot of this game plays out like a movie. There's a lot more story than the average FPS has. The production values are great. The people look like real people, not the idealized square-jawed, muscle-bound marines and silicone-enhanced heroines of the average game. The voice acting is a cut above the usual (supposedly Clive Barker himself plays Ambrose), and the rich sound effects - the haunting music, the little sounds like the scrabble of claws on stone, the drip of water, the creaking of floors - all add greatly to the experience. Visually, this game is wonderfully detailed. It's got the best depiction of fire I've ever seen. Lace curtains billow in the breeze. The weather changes, and when it rains, things get wet. When you walk through blood, you leave a trail of bloody footprints behind you. You see your reflection in mirrors. (Some of the most hair-raising moments come when you're looking in a mirror, and see a ghost materialise behind you, or a monster sneaking up on you.)

Clive Barker was reportedly deeply involved in this project, and it shows. The story isn't as good as one of his books or even movies, but it's much stronger than in the typical FPS. Barker is an artist as well as a writer; perhaps that's one reason for the visual lushness of the game. There's also a touch of homoeroticism, as regular readers of Barker have come to expect. There are little hints that the main villain is motivated partly by jealousy of Patrick and Jeremiah's "friendship." And the statues and paintings that decorate the Covenant mansion are of naked men as often as of naked women - very appreciated by us female gamers. ;-)

The game isn't perfect. Because of the rich story, the game is very linear. Personally, I didn't mind that; I hate rattling around in an empty maze, no monsters left to kill, looking for the way out. In Undying, doors don't open until you're supposed to go through them. The puzzles are also fairly easy. Some have complained about that, but I liked it; it kept the game fast-paced and interesting.

Undying does seem to have been rushed a bit. The early missions are much longer than the later ones, as if they ran out of time and rushed to finish. The last mission is not quite as graphically stunning as the others. And the final boss is not particularly scary or difficult to kill.

More serious problems (and the reason for the half-star deduction) are the technical issues. Because the areas are so large, and they hoped to make a console version eventually, you get frequent load screens. It gets exceedingly annoying after awhile. Sometimes, you get load screens two or three times along a fairly short corridor. There's really no excuse for that. Why should we PCers suffer, just because Playstation has limited memory? Also aggravating is that there's no way to skip the cinematics. There are a lot of them, and they look pretty cool. (You get a different "death" for each monster who kills you!) However, many of them are quite long, and it's frustrating to have to sit through them the second or third time. I also found the game a tad unstable. Every once in awhile, it would just crash, for no reason I could determine.

Despite these technical problems, I found the game worth it - wonderfully immersive and absorbing. At times, it was so scary I couldn't play it for long. It's recently been re-released as a "classic" game, with a lower price and no dead-tree manual. (You do get the manual and diary that came with the original game in PDF format.) If you shop around, you can get it for under $10, and it's definitely worth it.

NOTE: Though the box states that only Windows 95, 98, and ME are supported, it ran just fine for me under Windows XP.