Red As Blood: Tales From the Sisters Grimmer 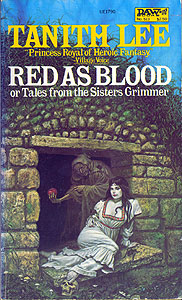 I've always enjoyed fairy tales, but as I grew up, certain aspects of them started to grate: for example, the roles of women as either passive prizes for the hero or evil witches, and the way conventionality is always rewarded. In this book, Tanith Lee offers the best of both worlds: the beauty and enchantment of childhood tales, pitched to more modern and mature sensibilities. As the title suggests, many of the stories have a subtly feminist slant; all have female protagonists. And many emphasize the macabre elements - always present in fairy tales, but usually glossed over since the they became "children's" stories.

Lee and fairy tales are a natural combination. Her lush, vivid prose is perfectly suited for the glamorous and terrible world of fairy tales, and she never forgets what makes fairy tales so much fun. The stories keep their magic. But here, the princesses are lovely, but not necessarily innocent. The witches and stepsisters are not always ugly or evil. And the handsome princes may not be the marrying kind. Though retelling fairy tales is quite common now, at the time this book was written, it seemed startingly original, especially with the dark twists Lee gives the stories. Though not quite as surprising as it was twenty years ago, the book has held up well.

There are nine stories, each set in a different era. They are arranged chronologically, with the first story taking place in the first century B.C. and the last, sometime in the future. My favorites are "Paid Piper," a retelling of the Pied Piper story; "Red As Blood," a retelling of Snow White; and "When the Clock Strikes," a truly wicked retelling of Cinderella.

The book also has a special bonus: interior art by the author. The black and white illustrations look like wood cuts, but might be pen and ink. The style looks a bit Art Nouveau-ish.

This book was nominated for the 1984 World Fantasy Award for best anthology/collection, and "Red As Blood," the title story, was nominated for Nebula Award. Alas, it is now out of print. Used copies are readily available, but relatively expensive (generally more than a new paperback would cost).